Miami Beach Commissioner Michael Grieco said Monday he was dropping his re-election bid because of the “sacrifices” he’s made for his family — but he’s actually quitting the race because he’s negotiating with state prosecutors over possible criminal charges from a campaign-finance scandal.

The Miami-Dade state attorney’s office has uncovered evidence that Grieco used a straw donor to conceal at least one illegal contribution from a foreign national, according to sources familiar with a public corruption investigation that began in late June. The donation was made to a political committee secretly tied to his campaign. Federal law prohibits foreigners who do not hold a green card from contributing to elections in the United States.

The origin of the money was unexpectedly discovered by investigators as they interviewed donors to People for Better Leaders, a committee that took in about $200,000 from Beach bigwigs, including city vendors, lobbyists and real estate developers.

State prosecutors began investigating Grieco and the PAC’s activity after the Miami Herald revealed the commissioner’s connection to the PAC in June. He had stridently denied any links to the group.

A criminal charge while in office would compromise Grieco’s ability to serve out the last days of his term because Gov. Rick Scott would then have the power to remove him from office.

Before abandoning his re-election bid, Grieco was set to face two challengers for his commission seat during the Nov. 7 election.

Addressing commission chambers Monday morning, Grieco said he was dropping out “because of the many sacrifices I have had to make for my family, my clients, my health and my law practice.” He did not mention the investigation and refused to take questions afterward, stationing a police officer in front of the dais to prevent reporters from approaching.

It’s the second time this year Grieco, a criminal defense attorney and first-term commissioner, has abandoned a political campaign. He started the election year as a formidable contender in the mayor’s race. But he quit after the Herald broke the news of the criminal investigation, citing what he called “an unrelenting mudslinging contest” and switched back to running for a second term as commissioner.

Grieco did not respond to a request for comment Tuesday afternoon. Ben Kuehne, an attorney representing him in the criminal probe, said he had no comment.

One way to get around the ban on accepting foreign money for elections: donating the money in the name of a U.S. citizen.

That’s what investigators believe happened with People for Better Leaders, according to sources familiar with the inquiry. The Herald was not able to confirm the identities of the donors or the amounts of money involved.

It’s illegal under Florida law to donate money to a political campaign in someone else’s name. Any attempt to mask the source of funds through the financial system could also trigger a violation of Florida’s money-laundering statute.

Depending on the sums involved, money-laundering charges can range from first- to third-degree felonies and include fines up to $250,000. The Federal Election Commission could also assess civil fines if the PAC knowingly accepted foreign money.

State Attorney Katherine Fernández Rundle’s office has not commented on the investigation.

“Per our policy, we can neither confirm nor deny the existence of any investigation,” said spokeswoman Lissette Valdes-Valle.

Miami Beach Commissioner Michael Grieco won plaudits from constituents for a populist approach during his single term in office. But a campaign finance scandal has ended his career in politics.

In June, Grieco denied any relationship with People for Better Leaders.

“It is absolutely untrue,” Grieco told reporters at the time.

But two separate handwriting analyses — one paid for by a donor to a political opponent’s campaign and the other by the Herald — confirmed Grieco’s handwriting appeared on a document the committee filed to state election authorities.

Confronted with proof of the commissioner’s ties, the PAC’s chairman, Brian Abraham, a former strip-club manager, said he had asked for Grieco’s help filling out forms. The commissioner, Abraham said, was unable to speak earlier because of attorney-client privilege. 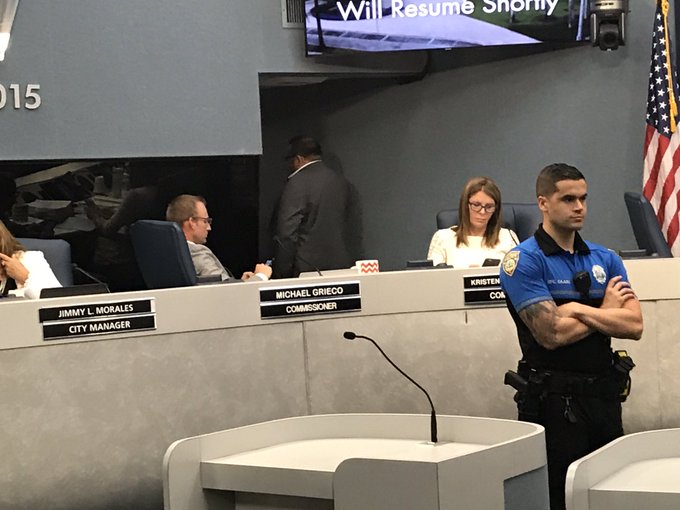 Meanwhile, People for Better Leaders was sanctioned by the Florida Division of Election earlier this month for failing to file required notices of its activities. State officials called the PAC’s conduct “willful” and said it showed “reckless disregard” for the law. But they declined to issue a fine. The Florida Bar is also investigating a complaint it received in reference to Grieco’s behavior with the PAC.

When the Herald revealed the state investigation in June, Grieco said he welcomed “an objective, thorough and professional inquiry because it will show no wrongdoing.”

Grieco, a former assistant state attorney, has not answered questions about his relationship to the committee since June.

Before he dropped out of the election, his supporters handed out fliers at campaign events touting his “ethical leadership” and accomplishments in office. A bullet point highlighted his sponsorship of campaign finance reform.